You are here: Home / Articles / Your Crossfit Open Scores Suck Because You’re Weak

But every Crossfit Open season delivers a reckoning.

Thousands of crossfitters arrive at one painful but unavoidable realization: they are not nearly strong enough.

I first saw this reckoning play out in front of me during the 2014 Crossfit Open season, when I was a very active crossfitter (the dark times before I wised up and committed to barbell training). That year, my Crossfit gym was really into the open and any athlete that worked out in the gym on a Friday attempted the open workout for that week. So crossfitters of all levels, including newbies, intermediate, and long-time crossfitters were doing these workouts.

The first workout of that year, 14.1 was an AMRAP combination of double unders and light power snatches. A barbell was involved but this definitely was a heart pounding cardio workout. 14.2 also involved a barbell but it was also all about the cardio, involving light overhead squats and chest-to-bar pullups. 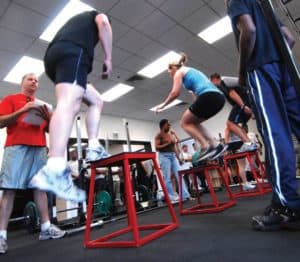 14.3 is a silly workout that probably isn’t safe. I am not encouraging anyone to do it. But many of us did do it back in 2014 so it is worth talking about the impact of that workout, which was quite simply: if you didn’t have a strong deadlift, this workout exposed it. 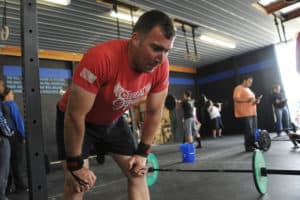 After 14.3, one incredibly well conditioned and committed crossfitter in my gym resorted to quitting crossfit for six months to focus exclusively on strength; he was motivated by the desperate and visceral defeat of spending minutes staring at a barbell, that his obsession with his Fran time, had rendered him powerless to move.

And the decision by even the most committed of crossfitters to focus exclusively on strength for a while makes sense. Crossfit Open workouts are not decreasing the focus on strength. If anything, Crossfit elevates its focus on strength every year. In fact, in 2015, Crossfit fundamentally changed the Open for the central purpose of jacking up the weights used in workouts; Crossfit bifurcated the open workouts into the “RX Division” and “Scaled Division”. This bifurcation allowed Crossfit to prescribe heavier weights in Open workouts (the RX Division) while allowing your average crossfitter to be able to compete instead of staring at an impossibly heavy barbell they couldn’t lift in their wildest dreams (Scaled Division).

Let’s take a look at some of the open workouts over the past few years:

There is no way to deny it: if you want to do well in the Crossfit Open, you absolutely have to be strong. And if you want to get strong, you need to put down the goddamned wall balls and jump ropes, abstain from the burpees and 45 minute metcons, and get your skinny, weak ass under a barbell.

And you have to commit to doing that for at least six months because strength takes a long time to develop as opposed to conditioning, which comes relatively quickly.

If you take six months away from Crossfit to focus only on strength, that increased strength will stay with you for life and weights that gave you hell in this year’s Crossfit Open, you may find yourself breezing through in next year’s open. As Mark Rippetoe says:

Once a man gets strong, he’s always stronger than he was before, even if he quits training, because the long-term adaptations have raised his baseline strength. Getting stronger is ‘expensive’ to your body, and expensive things are not usually disposed of quickly.

By the way, increasing your baseline level of strength does not just help you pick up the heavy weights. Let’s talk about those metcons that you crossfitters have such a big crush on. With respect to a crossfit workout such as Diane,which prescribes a 225 pound deadlift for men/155 deadlift for women, if your one rep max is 200/140, you will not be able to even post a score for that workout. (By the way, just a few days after I wrote this blog post, Diane was announced as 18.4).

The worst experience I ever had in the gym was completing 14.5/16.5, the thruster/burpee hellscape combination, which prescribes a whole bucket load of 95lb/65 lb thrusters. Seasoned crossfitters know what I am talking about with this workout. If you had this experience too and maybe wanted to someday be able complete this workout and not wish you were dead, you would want to get your one rep max thruster up as high as possible so that 95/65 doesn’t feel heavy. When your one rep max goes up, lifting lighter weights at higher reps becomes easier. Period.

If you have ever felt defeated by an open workout with heavy weights, stared helplessly at a barbell, or wished your one rep maxes were higher, it’s time to do something different. You don’t have to quit crossfit forever but you do need to press pause, commit exclusively to strength training for at least six months, and get reps in with a barbell. If you’re interested in doing that, contact us!

When you go back to crossfit, your new strength baseline will pay off in spades.