You are here: Home / Articles / Strength Training Makes You a Better Soccer Player 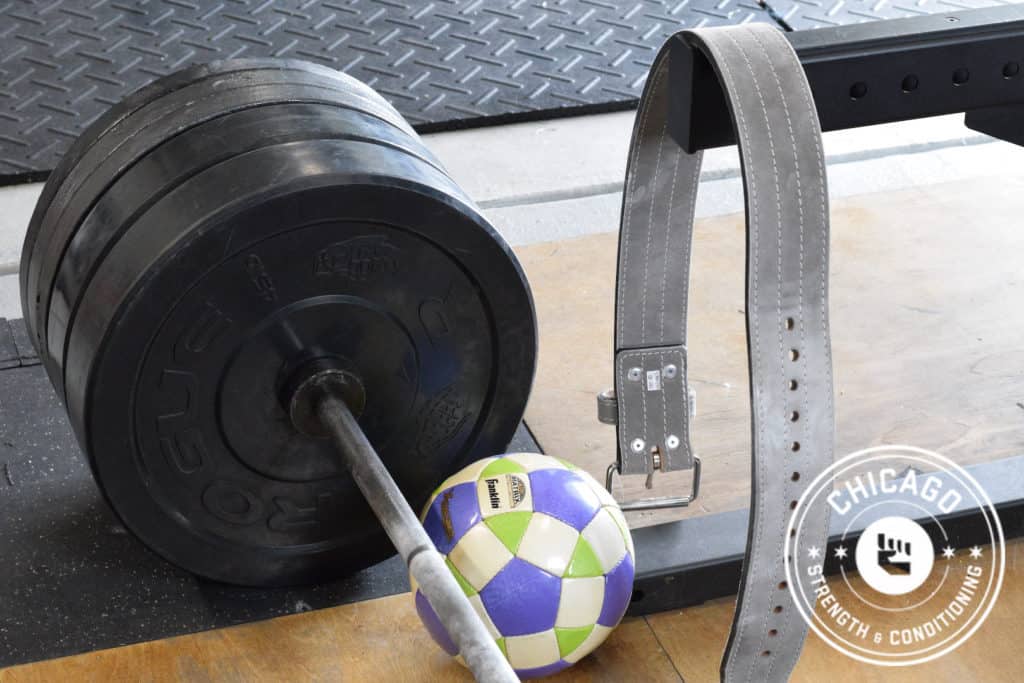 Chances are if you or your children are soccer players then you know at least a few soccer players who have a serious knee injury. The constant running and change-of-direction required to play soccer requires significant lower body strength to perform safely. However, most soccer players pay little attention to lower-body strength. As a result, they are more likely to get injured. If you love soccer, spending some time under the barbell will help protect you from injury, and will probably make you play better.

Soccer players are hurt quite often. The injury rate is 62 per 1000 hours. Powerlifting, interestingly, has an injury rate of 0.008 per 1000 hours.1 Knee injuries are common, especially for women. One review found the rate for female soccer players in college sports to be 0.31 ACL injuries per 1000 athlete exposures.2 To give you some perspective, the rate of ACL injury for college football players ranges from 0.124 to 0.173 injuries per 1000 athlete exposures.3 Soccer players are about twice as likely to injure their anterior cruciate ligaments as football players. How do you like those odds?

ACL injuries are a big deal. The joint can be reconstructed, but you are at a higher risk of later damage: “We conclude that, despite the possibility of return to high-level activity with a definitive unstable knee, this will lead in 95% of cases to meniscal and cartilage damage over the next 20 years.”4 It is enough of a problem that people have attempted to work out ways to fix it. Programs have been designed based on the premise that the problems, the things that causes injuries, are defects in the mechanics, the balance, the agility, or the strength of the athletes. They use balance balls, various agility drills, and plyometrics. Some of the interventions help and some don’t. Some of the balance ball interventions actually made things worse. The programs that worked best were those that had some element of strengthening, although the interventions weren’t anything that I would call strength training.5 One study found that the more neuromuscular training the athletes did, the better protective effect there was.6 This should give us a clue on how to proceed.

More training of the muscle equals more protection. Think about the structure of the knee. It is a loose, mobile joint protected by ligaments, but also protected by the quadriceps and hamstrings. The quadriceps pulls the tibia by means of the patellar tendon, in which is the kneecap. When the knee is flexed, such as at the bottom of a properly done squat, the patella applies pressure to the joint capsule, acting as a built-in knee wrap. The hamstring muscles pull the tibia to the rear, counteracting the pull of the quadriceps and helping to keep the knee stable. In addition, there is a stretch reflex when a muscle is quickly stretched. The muscle contracts to protect the joint. If I grab your arm and jerk it, you will quickly contract to resist my pull. More muscle, more resistance. Now imagine the situation on the soccer field when you make a quick plant of the foot and turn, or when you collide with another player: there will be very sharp tugs on your leg musculature. Wouldn’t you want to be strong in order to resist damage to your knee?

In fact, studies have shown that greater strength helps prevent injuries.78 Why don’t they just lift weights? It’s actually rather infuriating to read these journal articles and find that no one recommends a simple strength program. If being stronger keeps you from getting injured, why not just get stronger? We know that Olympic weightlifters, who squat deep every day, have very strong knees, very few knee injuries, and healthier and thicker connective tissue in the joint.9 Coaches might fear that their athletes will get slower, there might be lack of time to institute a proper strength training routine, or more likely there might be a lack of understanding of the general adaptation syndrome and how to use it to get stronger. But we here at Chicago Strength & Conditioning can help.

Strength Training is What We Do

If you are a soccer player, do you have an off-season? Then let’s get you on a linear progression, have you squat, bench, press, deadlift, and power clean. In a short time we can make you one of the strongest players on the field. During the season we can adjust as need be. For a novice, you can likely just continue the program, although we might have to adapt the frequency to allow you to perform in games and still recover. Don’t be afraid that muscle will make you slower. It won’t. As Mark Rippetoe says, cars don’t get slower when you put a bigger engine in them. You’ll be stronger, faster, you’ll be able to kick the ball harder, and you’ll be safer from injuries. Let’s get you started.

If you’re convinced that the soccer player in your life could benefit from strength training, or you have questions, please contact us today.